A couple of details of our short stay in London will have to remain secret for contractual reasons. However, we will be able to share the most interesting stuff anyway

On November 3rd, we arrived late in the afternoon. We immediately checked in at our hotel,  the beautiful Trafalgar St. James, right at Trafalgar Square, London.
A Nelson Double Queen Room had been reserved for us. Spatious, Beautiful, Luxurious. A lot more luxurious than we would book for ourselves, to be honest, but we wouldn’t want to complain! 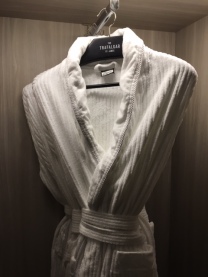 After a quick wardrobe change, we took the tube to The Underworld, in Camden.
Battery was scheduled to play there. They supported NY hardcore legends Cro-Mags.
The show was sold out, but through Mike, a good friend of Kristof, who plays guitar in Battery, we managed to get in anyway.
Battery is a hardcore band hailing from Washington, DC. They split up somewhere in the late 90’s, which meant that Kristof had been waiting since his late teens to see them again. I hadn’t heard of them prior to meeting Kristof, and however I don’t regularly listen to hardcore, i really enjoyed the energy during their set, and witnessing the joy in Kristof’s eyes made it a memorable show, to say the least.

After the show, we needed food. I know, we’re predictable.
We decided on Dou Dou. It was right across the street from The Underworld.
Dou Dou is a Chinese and Thai inspired all-you-can-eat buffet restaurant, that serves nothing but beautiful and delicious vegan dishes. And it does so very cheaply too. 5,90£ for lunch, 6,90£ for dinner and during the weekend. If you plan on visiting them, do bring cash, no card payments possible here. (Also take-away possible!!!)
Safe to say we went back for multiple rounds, and tried pretty much everything they had on offer, which counts for about 40 different preparations!!!

It had been a very long day, so after out bellies were full we decided to head back to the hotel, to shower, bathe and relax in the room for a while. We’re not party animals, so a good night sleep was next on the to do-list.

Hackney Downs Vegan Market.
I read some amazing things about this vegan market online, and on other blogs. (fatgayvegan.com) It’s a little out of the city centre but seriously worth the ride. We took an underground and overground to get there.
First piece of advice: Go EARLY! The market’s from 11 am to 5 pm and some of the stalls start selling out already around 1.30. We did get there in time, and the presence of a little rain may be the reason the market was a little less busy than usual. 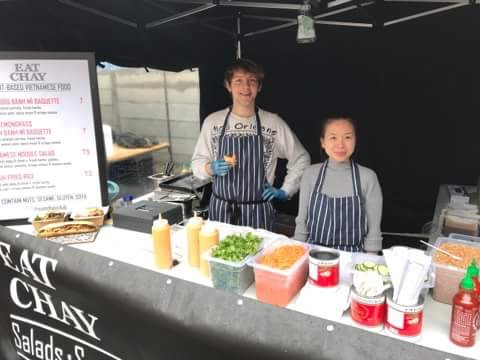 For starters we shared the Korean BBQ Bahn Mi baguette from Eat Chay.
Liz and Calum were very informative and engaging, and even up for a picture!
The Bahn Mi was out of this world, too good!

We als couldn’t resist the amazing burger and grilled cheese smell from The Temple Of Seitan. If you need a cheeseburger, and you don’t want it to look as healthy as many vegan burgers tend to do? Check out their burgers. but don’t let the looks deceive you. they are 100% vegan, not that greasy and overly delicious! 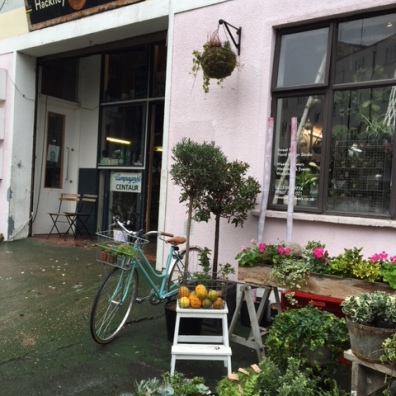 Once again we ate too much, in too little time. We felt the need to walk it off, and just took the overground back into Liverpool Street Station and went on by foot.
Walking past The Shard we remembered Borough Market. A British couple had recommended it to us, when we sat next to their table at the beach in Barcelona.
We didn’t expect there would be any vegan food, but Big V had a booth there (they were also present at the Hackney Downs market)! So… We ordered the chimichurri. Vegan chorizo, on a crusty ciabatta, spicy chimichurri sauce, pickled peppers & onion! Fingerlicking good!

We went on following the southern bank of the river Thames, on found ourselves at the entrance of the Tate Modern Musuem. Musea, are a must almost everywhere we go, since we are both a little passionate about art as well. The Tate Modern exhibited a collection of Mark Rothko masterpieces. Kristof’s favourite. We strolled through the rooms like we always do, and even took the time to climb a what seemed infinite amount of stairs to reach the observation deck of the museum. There are elevators though, but they were always full, and we didn’t want to wait it out.

Crossing the Millenium Bridge, passing St. Paul’s Cathedral we headed back towards our hotel to freshen up, and have another little bite to eat.
By now we had lost count on how many Pret-A-Manger places there were (Seriously, how many, in London alone, must be over 300) that we couldn’t resist entering one, to check out if they had anything vegan for us. We’re thrilled to inform you that they do!
We had a Latte with coconut milk, a peppermint tea, and an avocado & chipotle chickpea salad wrap. And there are more options available, great!!! Nothing too fancy thought, but it’s great to know that you have a vegan option around practically every corner.

Afterwards we headed over to the Piccadilly and Regent Street area, where city workers were hanging the christmas lights and we intended to do some evening shopping. We got to Antropologie, one of my favourite stores to visit. Everything from fashion to interior design, you can find here. They have a living wall, with plants expanding over 3 stories high, and a special “husband storage”, with a comfortable sofa.. 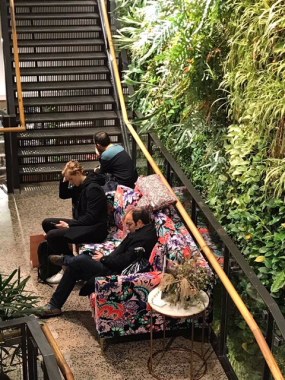 Kristof was a champ and didn’t need to be put there! On the other hand, that meant that he had an opinion about everything i touched. Well, you can’t have it all!
With having walked about 20km (12,5 miles) we went back to the hotel to rest our feet and our bodies.

We got up bright and early for our complementary breakfast. The avocado on toast was pretty great! But… no time to waste. Right on the other side of Trafalgar square the National Gallery basked in early sunday sunlight.
The entrance is free, but you are kind of required to put some money into the donation box. An amount of your own choice. Perfectly acceptable!
The National Gallery is an entirely different beast than the Tate Modern. It harbours masterpieces of the most renowned classical artists the world has ever known. From Leonardo Da Vinci, to Van Gogh, Monet,…
We particularly enjoyed the Turners on display. William Turner is best known for his expressive landscape an marine themes. If you want to immerse yourself in classical art, the National Gallery is an absolute must.

We left the Gallery at about noon, and we were supposed to be picked up at the hotel at 3.30pm, which meant we had another 3 hours to spend. If you don’t know is by now, you might be surprised that we decided on spending some more time feeding ourselves.
We knew about a Wagamama restaurant close by. Wagamama is a chain of Asian restaurants that spread over 20 countries, and have over 140 restaurants.
They just started with their vegan menu, and we were very keen on trying some of it out.
It is so refreshing to have a seperate menu for vegans (or vegetarians) with more than one option, in a larger chain of restaurants.
I ordered the Kare Burosu Ramen, which is basically a spicy curry vegetable broth with tofu and grilled mushrooms. Kristof had the Warm Chilli Yasai Salad, with tofu, stir fried red peppers, tenderstem broccoli…

Both were very quickly delivered to the table, and extremely satisfying to eat.
We also took the time to have a little dessert. A pink guava and passion fruit sorbet, and a lemongrass and lime sorbet. Both were delicious, and a very nice touch after a somewhat spicy main course.
Staff were extremely friendly, and interested in hearing about our trip, one of the servers even sat down at our table for a quick chat. That probably won’t happen when the place is packed, but it does feel very nice when it’s a little calmer. As a professional once told us: When the place is a little less packed, it gives us the chance to give a little extra attention to the customer. A lesson well learned here at Wagamama.

That would conclude our little stay in London. A driver in a fancy Mercedes pulled up to the hotel lobby to pick us up, and drop us off ant St. Pancras Station. Right before hopping onto the Eurostar Train back to Brussels, we raided the in-station Marks & Spencer.  We found a Butternut Squash & Tabblouleh wrap, a Chestnut Roast wrap, and Roasted Veg sandwich (with avocado, chilli squash on red pepper bread – our favourite..), all of which were vegan, qnd were happily consumed on the 2 hour train ride into Brussels.

We are very happy that large chains start offering ready-to-go vegan options.
We also hope that a lot of Mainland European chains will follow suit sooner rather than later!

Have you been to London? Got something you want to share with us? Or want to reply to this article, click here.